You can make a good decision… and lose – Ask Pete Carroll 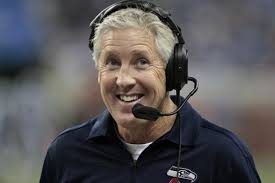 Pete Carroll will be long remembered as “the coach who blew Superbowl 49.”

Everyone KNOWS that he should have had “Beast Mode” run for the winning touchdown, but instead:

But let’s take a moment and fresh look at: How would a strategic or data-driven manager make the decision to run or pass?

Let’s take a more sophisticated look. It is second down from the one yard line with 26 seconds left and one time out. Conservatively assume each attempt has a 50% chance of success. A strategic manager would like to plan for three plays instead of two (88% chance of victory instead of 75%).  Looking ahead: If two runs are unsuccessful time will likely run out – to insure three plays one of the first two plays must be a pass.

If you run on the first play and fail to score you must take a time out. At that point your next play must be a pass to insure the third try.

So in order to maintain some uncertainty for the opponent your best choice is.. to pass on second down!

OK, so my simplified game theory says Pete was correct to call a pass, but what does data show?

Great data is borrowed from an interesting blog post by Bill Barnwell, who believes Pete made a bad decision.

Throughout the entire 2014 NFL season teams faced with 1 yard to go for a touchdown:

Based on the one year data, passing seems a pretty defensible choice! (Who would think that it would be Russell Wilson in the Superbowl who throws the only interception in that situation all season!)

Is one year not enough Data? The 5 year stats seem to be pretty much a wash also:

Of course you can make the argument that Beast Mode is more powerful than the average back and the Seattle line is superior, so it is worth looking at what he had done the past three years from the one yard line:

So: On the data alone the pass call seems justified; including the strategy component it seems to be the RIGHT decision.

But… Wilson threw an interception… and Pete will be known forever as “the coach that blew Superbowl 49.”

Do I feel sorry for Pete?

No – I thought it shameful the way “Payoff Pete” exited USC days ahead of the NCAA scandal. So – Call it Karma… 😉

What do you think?