Effective Titles: Once more with feeling!

Titles drive the engagement of a blog post. Established bloggers such as Jeff Bullas suggest that you spend just as much time on producing the title as you do writing your post.

In his excellent book on how to deal with content shock, The Content Code, Mark Schaefer reiterates the 50% of time rule and suggests using some of the online title analysis tools to help with title development.

This graph is from a

n interesting article from CoSchedule titled Proof that Emotional Headlines get Shared More on Social Media. Using the emotional index (based on percentage of emotional words in title) titles with an index score of 28 were shared five times as often on average as titles with an emotion in the high teens. Titles in the 38-40 range were shared TEN TIMES as often!

Last week I posted an 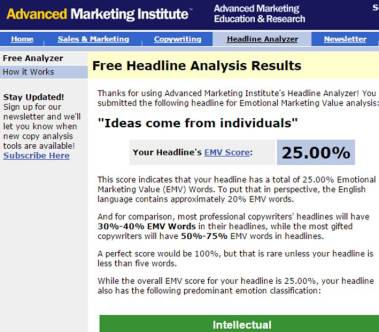 article on LinkedIn about problems generating ideas using  group brainstorming compared to individuals. I was disappointed with engagement on the first day and decided to take a look at the title. “Ideas come from Individuals” described the article and had a solid emotional index score of 25% as measured by the analyzer on the Advanced Marketing Institute page. The title was classified as “intellectual.”

experimented by adding a comma and two words – “, not groups” – to the original title. The emotional index doubled to 50 as shown in the next screen shot, which seems the ideal score. In addition the new title better described the article and showed up as “empathetic” and “spiritual” as well as intellectual!

I changed the title the next morning and something unusual happened… the viewership on days 2 and 3 exceeded the views on day one!

Take the time to get the title right!!!

2 Responses to Effective Titles: Once more with feeling!